Why do the wise always doubt themselves, while the uninformed are always so sure of their case?

1. To start off with

Has it ever happened that while you’re involved in an argument the other person who is uninformed has the better of you, even though you know you’re the one who knows best? This is called the Dunning-Kruger effect.

We all know someone who overestimates their own knowledge, in spite of the fact that they don’t know much of the topic.  These people do not even know the extent of their ignorance and you are wondering: “How on earth can this person be so – well – stupid? Yet you are unable to defend yourself or your argument against them.  They’re always just one step ahead of you, no matter how knowledgeable you may be. For them it is a matter for “fake it until you make it”.

The Dunning-Kruger effect boils down to the fact that brilliant people always tend to underestimate or doubt themselves. Uninformed people, on the other hand, always think they are brilliant.  The Dunning-Kruger effect suggests that the highly skilled people accept that what is easy for them, will also be easy for others. Often the unskilled people cannot recognize their own lack of insight.

You realize their arguments are insignificant, but still you can’t defend yourself and lose the argument.  In your mind you often wonder why you could not control the argument or defend your point of view.

Please look at the following picture: 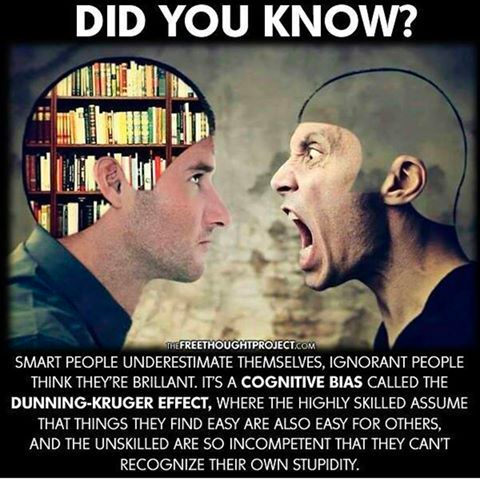 You may have witnessed this scene at work, while socializing with friends or over a holiday dinner with extended family: Someone who has very little knowledge about a subject claim to know a lot. That person might even boast about being an expert.
This phenomenon is nothing new and has a name: The Dunning-Kruger effect. It’s not a disease, syndrome or mental illness; it exists in everybody to some extent. It has been around as long as human cognition, though only recently this phenomenon has been studied and documented.
In a paper, published in the Journal of Personality and Social Psychology, (1991) David Dunning and Justin Kruger agreed with statements of philosophers such as Socrates and Plato, stating “ the only true wisdom is knowing you know nothing.”

Charles Darwin (1871) was of the opinion that “ignorance more frequently begets confidence than does knowledge.” Put simply, incompetent people think they know more than they really do and they tend to be more boastful about it.

Dunning, in particular, was shocked by these results, even though it confirmed his hypothesis. Time after time, regardless of the subject, those least likely to know what they were talking about strongly believed they ‘knew’ as much if not more than the experts.
What happens when incompetent people are unwilling to admit their shortcomings? Are they so confident in their own perceived knowledge that they will reject the very idea of improvement? Not surprisingly (though no less concerning), Dunning’s follow-up research showed the poorest performers are also the least likely to accept criticism or show interest in self-improvement.
The Dunning–Kruger effect is a cognitive bias in which unskilled people make poor decisions and reach erroneous conclusions, but their incompetence denies them the ability to recognize their own lack and mistakes. The unskilled therefore suffer from illusory superiority, rating their ability as above average, much higher than it actually is. On the other hand, the highly skilled underrate their own abilities, suffering from illusory inferiority.
People who pretend on social media that they are experts, are usually not the experts they pretend to be. Sometimes the educated person just doesn’t want to defend his or her field because they are a master in that field.

2. What is the Dunning-Kruger effect really?

The Dunning-Kruger effect is a cognitive bias in which people of low ability have illusory superiority and mistakenly assess their cognitive ability greater than it really is. The cognitive bias of illusory superiority comes from the low-ability people to recognize their lack of ability. Without the self-awareness, poor performers cannot objectively evaluate their actual competence or incompetence. People of high performance incorrectly assume that tasks that are easy for them are also easy for other people.
High performers are fully aware of the vastness and complexity of the field they’re working in. They usually underestimate their ability and competence in a particular area. Therefor the wise always doubt themselves while the uninformed are usually overly assured of themselves. They even make people who have knowledge about the subject, doubt themselves!
In contrast to high performers, poor performers do not learn from feedback they receive or suggestions given about how to improve themselves. That’s because they believe they know it all.
The philosopher, Plato, commented: I know as a matter of fact: I know that I know nothing. Therefore, I know something and that is that I know nothing. Other people don’t even know that they know nothing!

3. What the philosophers had to say

Although the Dunning–Kruger effect was formulated in 1999, the cognitive bias of illusory superiority has been known throughout history and identified by intellectuals, such as:
• the philosopher Confucius (551–479 BC), who said, “Real knowledge is to know the extent of one’s own ignorance”;
• the philosopher Socrates (470–399 BC), who interpreted a prophecy from the Delphic oracle that he was wise despite feeling that he did not fully understand anything, as the wisdom of being aware that he knew nothing;
• the playwright William Shakespeare (1564–1616), is of the opinion that “the fool doth think he is wise, but the wise man knows himself to be a fool”;
• the poet Alexander Pope (1688–1744) wrote in An Essay on Criticism, 1709: “A little learning is a dangerous thing”;
• the naturalist Charles Darwin (1809–1882) said, “Ignorance more frequently begets confidence than does knowledge”;
• the philosopher Friedrich Nietzsche (1844–1900), who wrote in Human, All Too Human (aphorism 483), “The Enemies of Truth. — Convictions are more dangerous enemies of truth than lies”;
• the philosopher and mathematician Bertrand Russell (1872–1970), claimed, “one of the painful things about our time is that those who feel certainty are stupid, and those with any imagination and understanding are filled with doubt and indecision.”

The psychological phenomenon of illusionary superiority was identified as a form of cognitive bias in Kruger and Dunning’s 1999 study: “Unskilled and unaware of it: how difficulties in recognizing one’s own incompetence lead to inflated self-assessments”.
The identification derived from the cognitive bias evident in the criminal case of McArthur Wheeler, who robbed banks with his face covered in lemon juice. He believed it would make him invisible to the surveillance cameras. This belief was based on his misunderstanding of the chemical properties of lemon juice as an invisible ink.
Dunning and Kruger tested the hypothesis of the cognitive bias of illusion superiority on undergraduate psychology students. After learning the students’ self-assessment scores, the students were asked to estimate their ranks in the psychology class.

The outcome was as follows:

• the students who were more competent, judged themselves far below their own abilities;
• the group of incompetent students overestimated their ranks in relation to their fellow classmates;
• competent students were also inclined to underestimate their own competence, because they erroneously assumed that tasks easy for them to perform were also easy for other people to perform.

5. Why less competent people have more self confidence

The Dunning-Kruger Effect doesn’t only happen in the academic field, it happens in almost every subject, field and situation. If you take a closer look, you will find it everywhere:
• Organizations tend to hire the most confident person during an interview, but often it turns out that that person is also the least competent;
• another good example is celebrities who think they’re smart being in the spotlight while scientists who made world-changing discoveries get no media coverage;
• your friend who claims to be a good driver or a great chess player is usually the least skilled;
• a total idiot marries a highly competent woman but controls her whole life.
The pressing question is: Why are the least competent people usually the most confident ones?
At university we had a friend in our residence who always criticised our girlfriends, although he himself never had a girlfriend. He could also easily win any argument. Yet, with all his “knowledge and superiority,” he never obtained his degree.?
The most incompetent person often overestimates their ability because they have no idea how much they don’t know. In other words: poor performers believe they know everything about a particular topic and therefore they tend to be overconfident about it. If you don’t know what you don’t know, you will not even know it!
Real knowledge is to know the extent of one’s ignorance.

6. How to recognize a self-appointed specialist

According to Wikipedia, for a given skill, self-proclaimed experts will:
• tend to overestimate their own level of skill;
• fail to recognize genuine skills in others;
• fail to recognize the extremity of their inadequacy; and
• degrade competent people (due to their own jealousy)
Those who genuinely know their field of interest are considerably modest when compared to those who have a fraction of their experience and knowledge, mostly acquired by word of mouth.
Let your work-code and achievements do the talking, and, if you genuinely deserve the label, others will be more than happy to assign it to you. This is the correct way to achieve “expert” status. It is given… not proclaimed.

I’ll leave you with the following thoughts:
“One of the most painful things about our time is that those who feel certainty are stupid, and those with any imagination and understanding are filled with doubt and indecision.” – Bertrand Russell
If someone tells you next time how stupid and unkind you are, you may, instead of defending or trying to prove yourself, realize that this is their own sense of incompetence. Moreover, this matter has nothing to do with you and that you have no need to even respond to it.
In any case, people will only realise what they said to you if they saw your reaction to it. If you show no response, they will never know if they have hit the mark or not.
A library full of silence speaks so much more as the noise of empty cans. 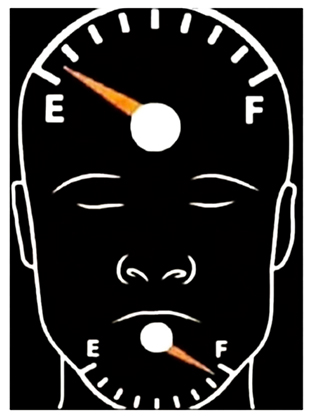