I hope the following will help you to achieve just that: to gain the ability to stand up for yourself, even when it’s difficult.

It is called “assertiveness”.  Assertiveness is an attitude, a way to behave in a situation where you may need to:

In order to be assertive, you may need to improve your self-esteem.  You also may experience higher anxiety levels or even depression.  If this is the case, it may be useful to consult with a psychologist.

Assertiveness is a way of acting that strikes a balance between two extremes: aggressiveness and submissiveness.

Non-assertive or submissive behaviour involves yielding to someone else’s preferences while discounting your own rights and needs.  You don’t express your feelings or let others know what you want and the result is that they remain ignorant of your feelings or desires.

Aggressive behaviour may involve communicating in a demanding, abrasive and even hostile way with others.

Assertive behaviour involves asking for what you want (or saying ”no”) in a simple, direct fashion that does not negate, attack or manipulate anyone else.  You communicate your feelings and needs honestly and directly while maintaining respect and consideration for others.  You stand up for yourself and your rights without apologising or feeling guilty.  In essence, assertiveness involves taking responsibility for your own needs, met in a way that preserves the dignity of other people.  Others feel comfortable when you are assertive because they know where you stand.  They respect you for your honesty and forthrightness. 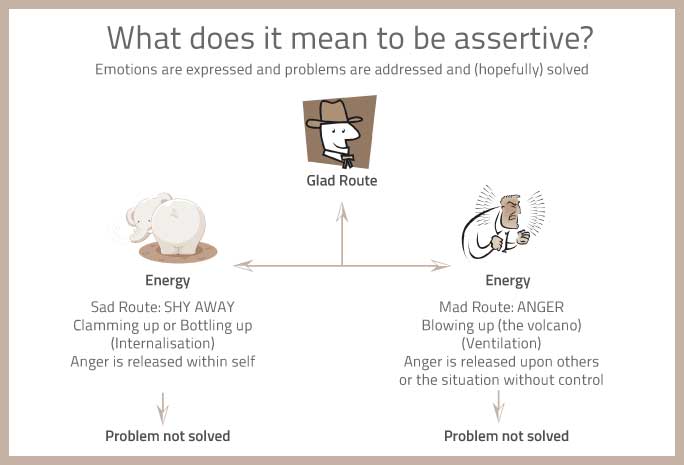 How needs are addressed 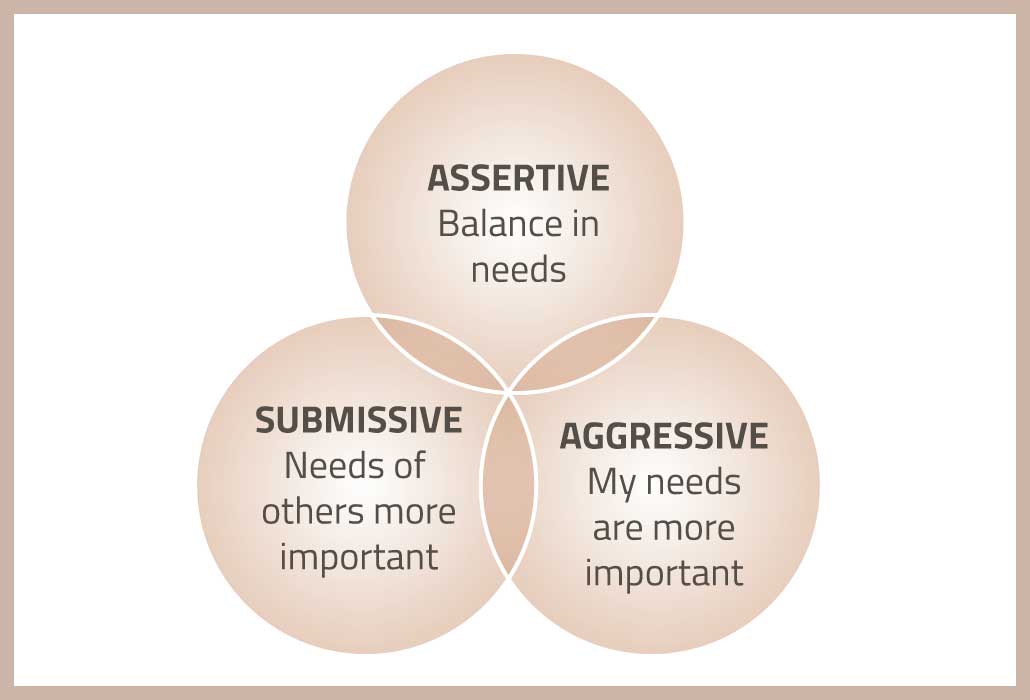 “I was raised to be ‘nice’. Which is fine, I guess, except that ‘nice’ meant never saying what you wanted, never saying ‘no,’ and never having an opinion different from anyone else. I thought the only way to be assertive was to yell and get red in the face. It took a while to learn that I could be honest and still be considered ‘nice”.

Assertiveness means more than just being able to voice your complaints. It is a set of communication skills that allow you to express respect and care for yourself and others. It means being able to say what you want to say when it is time to say it and feeling comfortable in doing so. Whether you want to express affection or annoyance; assertiveness skills are useful.

What does it mean to be assertive? The table below, adapted from work by Dr Lynn Alden (Paterson, McLean, Alden and Koch 1996), compares assertiveness with submissiveness and aggressiveness. As you read over each row, place a checkmark in the box that describes you best. When you are done, see which column has the most check marks. 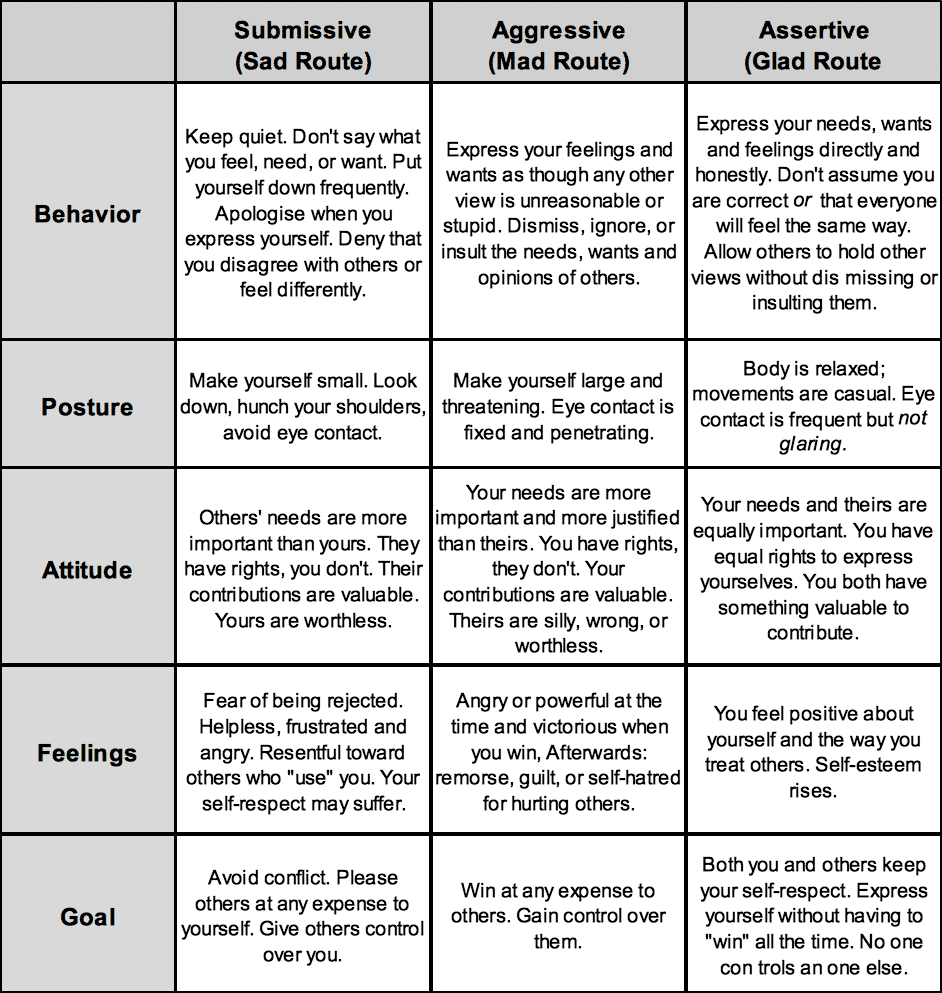 Assertiveness is how to portray yourself; not your core personality. Some people feel that they can’t be assertive because they don’t have the personality for it. However, assertiveness is a skill and not a personality trait and as with any newly acquired skill, it can feel awkward at first. It gradually becomes more comfortable as you master it. Just as it takes time to learn to ride a bicycle, it takes time to become more comfortable being assertive.

5. You have basic rights

Before you can become assertive, you will need to keep a few things in mind.

As human-beings, we all have basic rights.  Developing assertiveness involves recognising that you, along with everyone else, have a right to everything listed under the personal bill of rights.

Example: Even though it is selfish to put my needs before others, I can put myself first sometimes.

Evaluate your rights within the situation at hand.

Refer back to your Personal Bill of Rights; what are your rights in this situation. What gives you the right to ask for something you want and say no to something you don’t.

Before being assertive, ask yourself the following three questions:

If I am assertive:

Designate a time for discussing what you want

Find a mutually convenient time to discuss the problem with the other person involved.  Don’t attempt to organise a meeting at a time that isn’t convenient for everyone involved; maybe say to the person that you have something to discuss with them and would like to do so at their earliest convenience. It is a good idea to sit opposite one another at a table for instance.

Keep your tone of voice:

When you start to feel angry, realise it is not going to solve anything; take time out and discharge your feelings.  You may go outside and shout to get rid of your emotions, or you may take your pillow and imagine it is the other person’s face and hit him/her.  It is important to discharge your feelings before you re-engage in conversation again.

Express your feelings about the particular situation.

By telling other people about your feelings, you let them know how greatly their behaviour affects you and your reactions.

In expressing feelings, always be sure to own your reactions rather than blaming them on someone else.  The best way is by always remembering to begin your statements about your feelings with “I” rather than “You”.  “I – statements” shows that you acknowledge and take responsibility for your own emotions, while “You-statements” portrays a judgmental and accusatory attitude which will put the other person on the defensive and obstruct communication.  Begin a sentence with: “I feel this or that” instead of saying: “You make me angry”.

Suggest your solution for the conflict.

This is the key step to being assertive.  You simply ask for what you want (or don’t want) in a direct, straightforward manner.

Use I-statements such as:

Object to behaviour, not to personalities

An important aspect of being assertive is your ability to say “no” to requests that you don’t want to meet.  Saying “no” means that you set limits on other people’s demands for your time and energy when such demands conflict with your own needs and desires.  It also means that you can do this without feeling guilty.

In some cases, especially if you’re dealing with someone with whom you don’t want to promote a relationship, just saying “No, thank you”, or “No, I’m not interested” in a firm, polite manner should suffice.  If the other person persists, just repeat your statement calmly without apologising.  You may have to use the broken record technique.  Remember the days of records?  What happened when a record got stuck…got stuck…got stuck…got stuck?  You just repeat your declination: “No I’m not interested” over and over again in the same words and the same tone of voice.  Normally people will stop after the third attempt.  And remember, you don’t have to give any explanation, let your ‘no” be your “no”. If you need to make your statement stronger and more empathic, you may want to:

In many other instances – with acquaintances, friends and family – you may want to give the other person some explanation for turning down their request.  Here it’s often useful to follow a three-step procedure:

Use Step 4 only if you can easily see a way for both you and the other person to meet each other halfway.

9. A Metaphor: What the snake can teach you about being too nice

The snake was vicious, snarling and dangerous. He terrified the villagers, biting the children and scaring all the adults. But sometimes he felt lonely and craved companionship.

One day, a wise man wandered into the village. He clearly saw the chaos the snake’s actions had brought.

This is a story and in his wisdom, he spoke to the snake and, on gaining the reprobate’s trust, said, “Listen up, snake. You’re not only making the people here unhappy, but you yourself are clearly miserable. Practice some kindness and gentleness to improve the lot of everyone here, including yourself.”

And so, the wise man went on his way.

Years later, the wise one happened to pass again through that same village. To his surprise, he saw an inert, passive plaything being kicked by the children. He realised that this was, in fact, none other than the formally aggressive serpent he had words with years before. The snake managed to free himself from his tormentors and slide up to the man.

“Your advice was disastrous!” he hissed faintly. “Practicing gentleness has brought me complete misery! Now I’m used as a toy, laughed at and taken for granted. I was better off before!”

The old man replied, “You took my advice too literally and without reflection. I said that you shouldn’t bite… but I didn’t say you should never hiss!”

10. Questionnaire — How assertive are you?

You can now interpret your scores using the following information:

How you can use these results to your advantage?

The questionnaire helps you build a better understanding of your behaviour patterns and you can now build on your discoveries.

MIND OVER MATTER
Scroll to top